From course, I learned Evolutional Computing.

The EC loop (fill in details after presenting the algorithm) 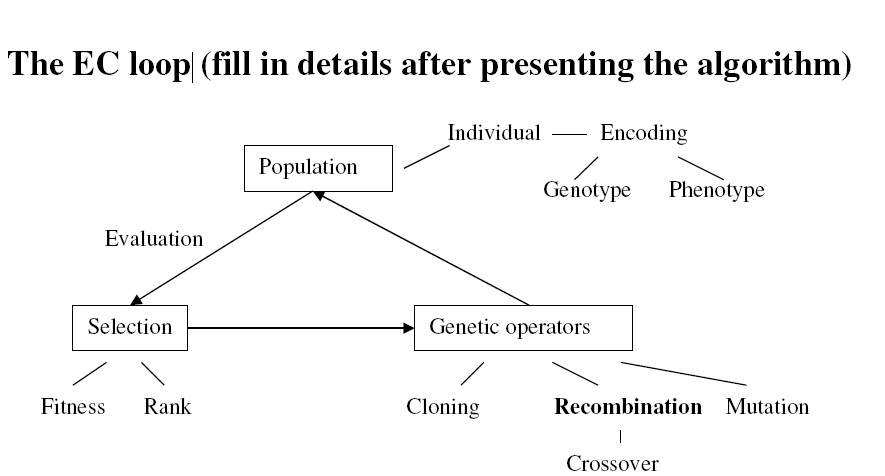 A solution to the problem is encoded by an individual’s genotype (genome, chromosome), e.g. (in GA) a binary string.

Example: A route in the travelling salesman problem (TSP) can be represented by a binary matrix or vector:

A genotype’s fitness (a scalar) is evaluated by a fitness function.

Selection of individuals is probabilistic, based on fitness or rank.

Elitism: Guarantee that the most fit individual(s) are cloned (to avoid accidental
destruction of the best solutions found so far)

Many more alternatives. For example, uniform crossover – randomly select from which parent to pick each bit.

Note: Some genotypes may be illegal (breaking syntactic or semantic rules). This would be very probable in the TSP example above. Cossover should be defined so that such genotypes can not be produced. [Explain why this is not strictly necessary]

Back to the TSP example

Other representations may make it easier to make crossover non-destructive.

Example, OX: Pick a sub-tour (bold below, like two-point crossover except that
we keep what's inbetween, instead of swapping it), then continue by picking the
rest of the cities from the the other parent, in order and excluding already visited
ones.

I will work as a PhD student of TU Graz in Austria. My research interests include Embedded/Edge AI, federated learning, computer vision, and IoT.

Theme Kratos Made By Seaton Jiang