To learn from unlabeled data (only inputs, no target information). Most often for classification. Requires that class membership can be detected by structural properties (features) in the data, and that the learning system can be fund these features.

Following is the algorithm.

This image is copyright by wikimedia.

This image is copyright by wolfram

Weight vector = coordinate in the N-dimensional input space ==> Each node has a position.

Changing the weights = moving the node.

Given input vector, x, find the node k which is closest to x (the winner). [the node with the smallest distance between its weight vector and the input vector]. Update node k so that it becomes even more likely to win next time the same input vector shows up, i.e. move it towards the input vector (SHOW):

This is the standard competitive learning rule

Note: only the winner is moved !

The winner-takes-all problem: If a single node wins a lot, it may become invincible.

Solution 1: Initialize the network by drawing vectors from the training set. Solution 2: Modify the distance measure to include the frequency of winning.

Also known as: Karhunen-Loève transform Idea: Find M orthogonal vectors in the input space, in the directions of greatest variance. Then project the data down to those vectors.

Principal components = eigenvectors of the correlation matrix of the input data, corresponding to the M largest eigenvalues.

In a linear MLP with one hidden layer (DRAW), trained as an auto-associator, the M nodes in the hidden layer will approximate the M first principal components. Interesting applications

Idea based on two observations: 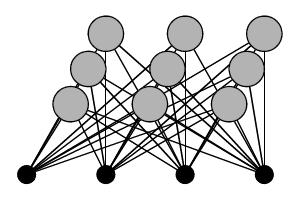 A 2 (usually) dimensional grid of neurons with common inputs.

Learning: Competitive learning, extended to update not only the winner, k, but also its closest neighbors (structurally, on the grid, not in the input space). [Note: Two different distance concepts – in the weight space and on the grid]

But, we don’t want to update the neighbors as much as the winner. Define a neighborhood function f(j, k) which is 1 for the winner (j = k) and then decreases with the distance (on the grid) from node k.

The update rule is a slight modification of the standard competitive learning rule:

After training, the active areas on the map are labelled by presenting patterns for which the generating class is known.

I will work as a PhD student of TU Graz in Austria. My research interests include Embedded/Edge AI, federated learning, computer vision, and IoT.

Theme Kratos Made By Seaton Jiang