Assign value to each board position (state):

From last lecture, we know that the value of a state s at time t is a (discounted) sum of future rewards (on average – lets drop the expected values for now).

If all values are correctly estimated, this relation holds by definition of ​\(V_t=\mathrm{E}\left(r_{t}+\gamma V_{t+1}\right)\), which is a variant of Bellman’s equation in DP.

If the estimates are not perfect, there will be a difference between the two sides of the equation. This difference is called the temporal difference error

Associate values to actions, rather than states. These are called Q-values.

The Q-value, Q(s, a) is the estimated value of doing action a in state s.

The right hand side - left hand side can be used as an error to update ​.

The Q-value is defined under an assumption: Q(s, a) is the estimated value of doing action a in state s, assuming that all future actions are greedy.

The assumption leads to a max in the relation:

Neural networks in Q-Learning (and Sarsa)

For large state space, we can store them in table.

Q-learning requires a large table (with an entry for each state-action pair).

ANNs can be used to estimate the Q-values.

Algorithms of Q-learning and SARSA

In this additional part, we are going to talk about the algorithms of Q-learning and SARSA. 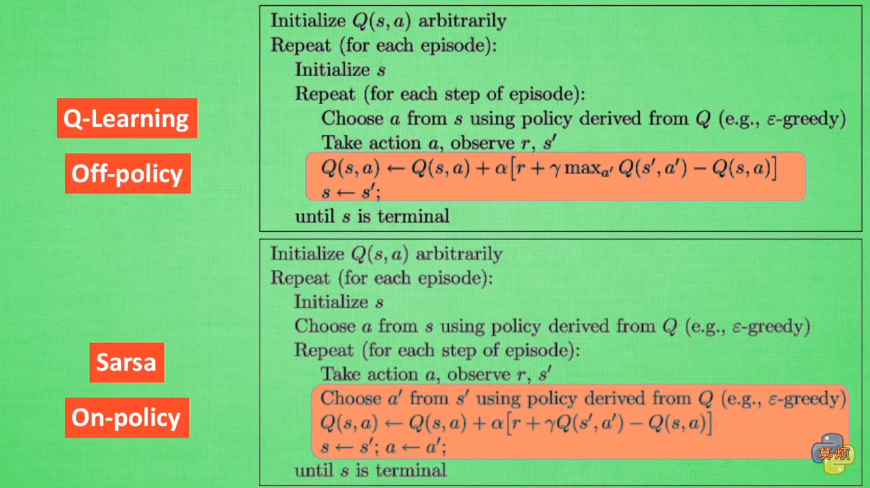 This figure is copyright by morvanzhou. In shows how these algorithms update Q table.

Let us focus on a state S that an agent stay in. The agent do action a(according to its policy), then it comes into state S'.

In the state S', there are some key differences.